South-West tour of Mauritius is one of the most-taken Mauritian trips. This is tour is famous because, within a day, one can cover most of the sightseeing places situated in the southern and western part of the country. 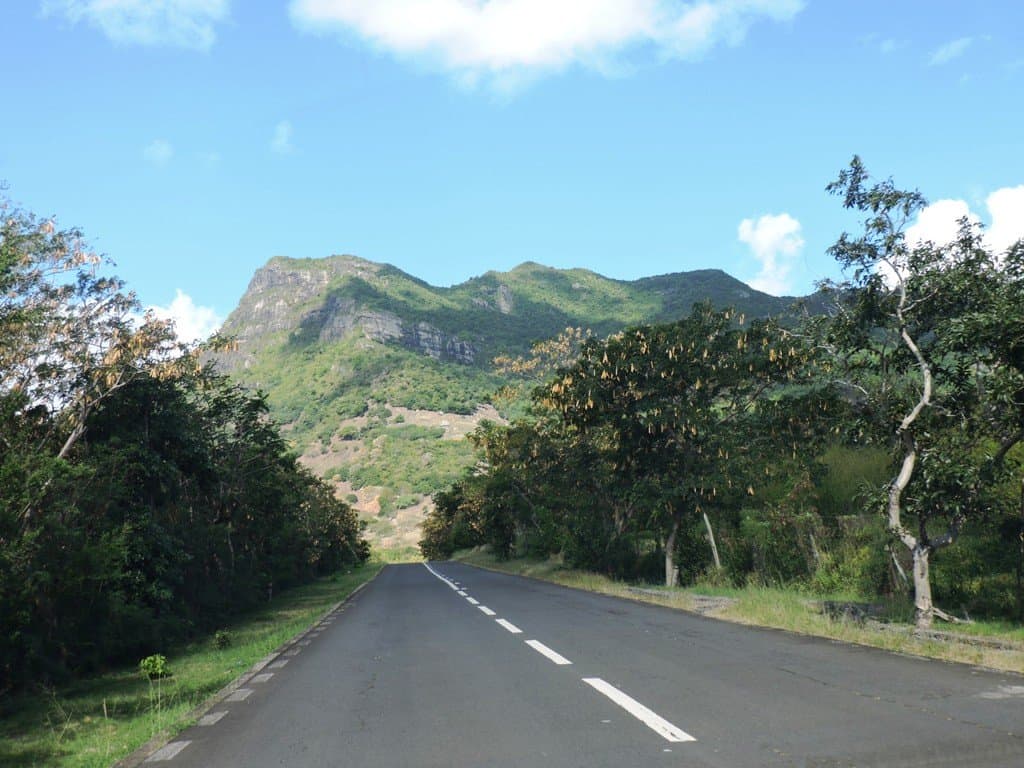 Here are some of the tips for the south-west tour of Mauritius:

I was residing at the Coral Azure hotel near Mont Choisy beach. We started our tour around 9’o clock in the morning. Our driver was also an Indian-origin guy. So, it was not a problem to communicate with him in our mother tongue.

Know that Port Louis or Pamplemousses are not a part of this tour. These places are covered separately as a part of the North tour of Mauritius. Also, these two places need a lot of time. So even if your driver agrees to show you these places, it is better to visit these two places, Port Louis and Pamplemousse, separately. Here is the list of places that we covered as a part of our Mauritius South-West trip:

Our first stop was at a model ship factory in Curepipe. We also saw a lot of tourists over there. You get a free tour of the model ship factory. You are also allowed to take pictures and make videos of the ship making. However, once you are inside the main shop, photography or videography is not allowed. 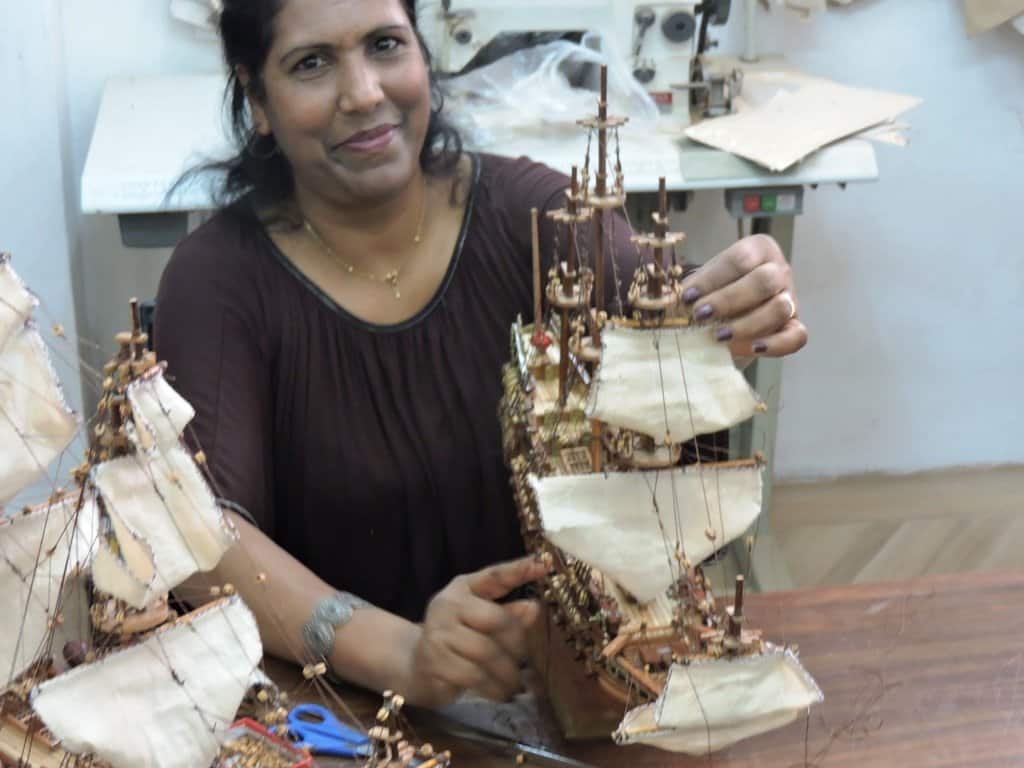 The free guided tour explains everything from wood cutting to ship-modeling to drying of woods. Also, There are a lot of things to buy at the model ship factory in form of a souvenir. For example, you can buy small ship models for close ones; you can also buy bigger ships; pieces of jewelry etc.

It is advisable that you do not buy pieces of jewelry in Mauritius. They are a bit expensive there. Also, I think all the drivers get their fixed commission from the model ship factory because they bring in the new tourists. But anyway, it is a nice place to visit.

Our next stop was at the Trou Aux Cerfs. It is a dormant volcano at the top of a hill. It is located in Curepipe, Mauritius. It is 350 meters in diameter and 80 meters in depth. The crater and volcano area is now completely inhabited. At the top, there is a viewpoint from where you can see the crater. 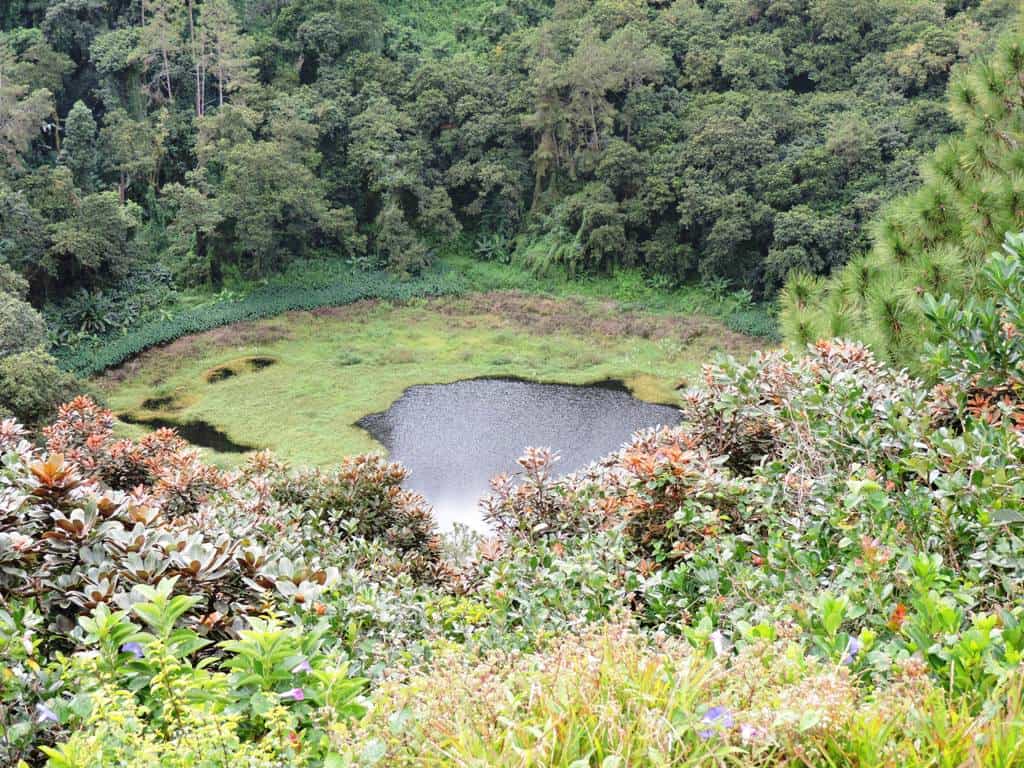 The crater is covered with water and grass but you can still see from there. There is also a nice and very beautiful view from the crater top. You get a beautiful view of the town of Vacoas-Phoenix and Quatre Bornes situated in the valley with beautiful hills in the background.

Mare Aux Vacoas was on the way from Trou Aux Cerfs to the Alexandra falls. There are a total of seven big lakes of fresh waters in Mauritius. Mare Aux Vacoas is the biggest lake of all. You can just park your car roadside and enjoy the calm environment of this biggest lake and Nature around. You can also do fishing there. But I think swimming is not allowed in the lakes as lakes are treated as sacred in the Mauritian culture.

Our driver told us that in the right season, people make jam, pickle, and chutney out of these guavas. To reach Alexandra falls, we had to leave the main road and cross a small but very beautiful papyrus forest. It is really beautiful. You also get a very nice view of the falls from the viewpoint. 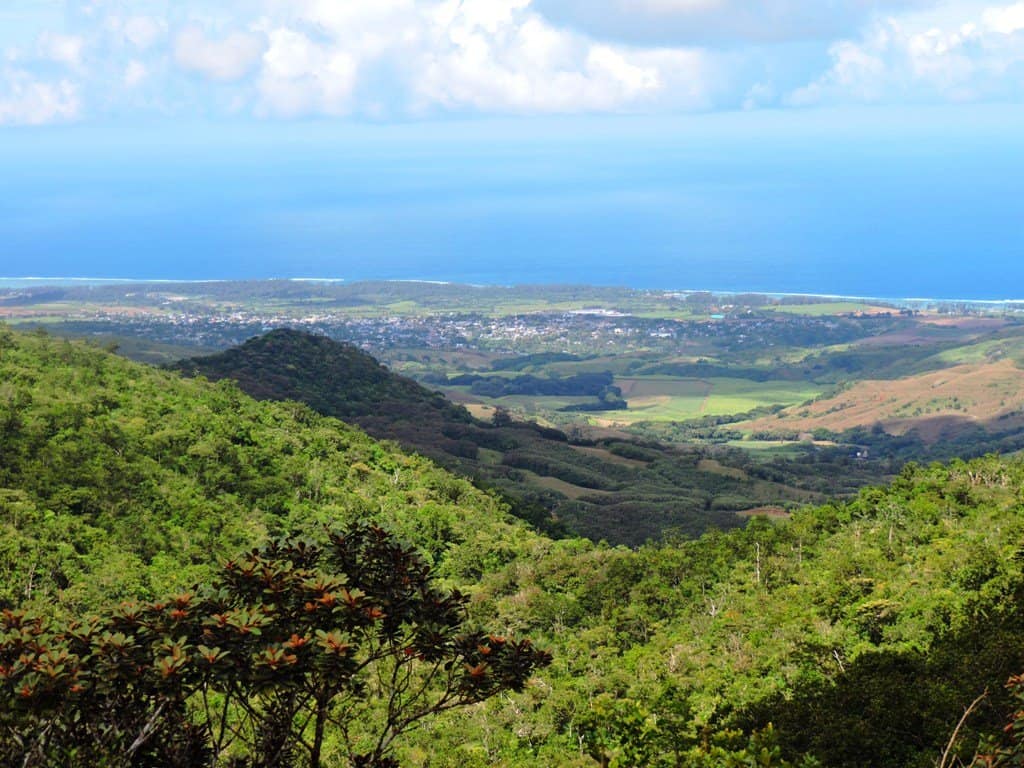 There is also a hiking trail to the falls. But you should practice caution when it has rained recently if you are planning to hike. From the viewpoint, you can also see the sea, remote towns, and forests.

Black River Gorges national park viewpoint is one of the most mesmerizing places in the Mauritius. Its name starts with “Black” because the river is situated so deep in the valley that from the top it looks dark or you can see black. 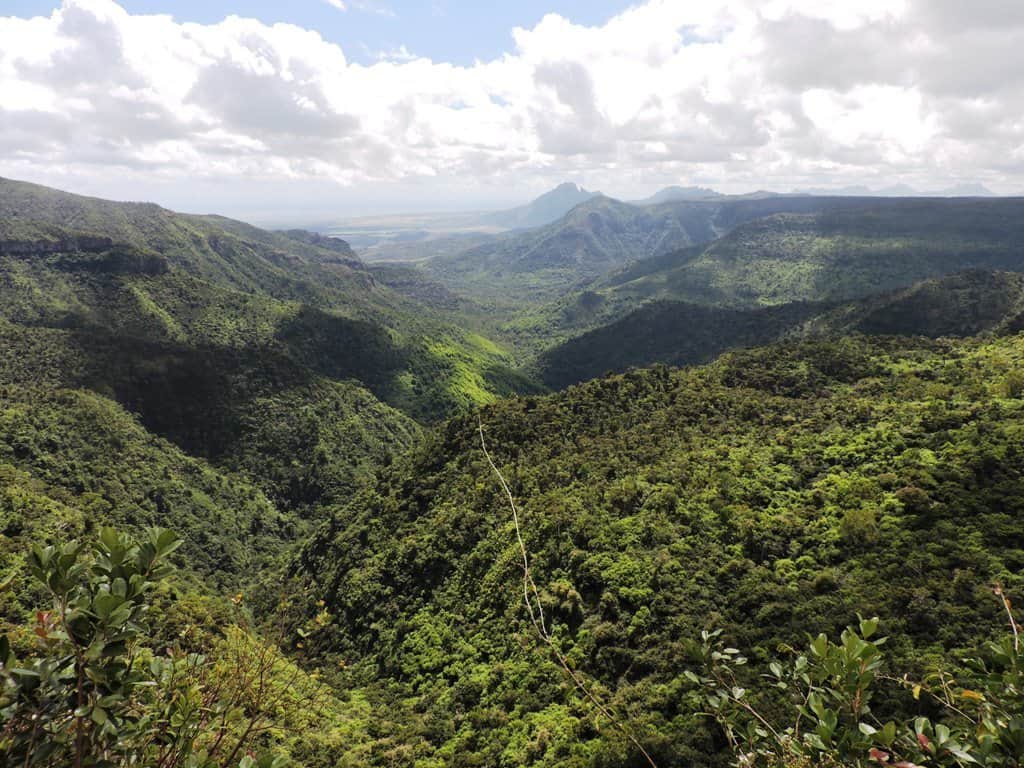 The view from the viewpoint lets you see the far stretches of the black river gorges spread across miles. There is also a waterfall which you can see from a distance. There are also hiking trails. If you love hiking, you should also try that.

This was the next waterfall after we left Black River Gorges national park viewpoint. This lies on the way from Black River Gorges national park viewpoint to Chamarel, Just before the Chamarel – Seven colored earth. Situated on Riviere du cap, this is one of the highest waterfalls in Mauritius. There are two viewpoints to this waterfall. Both of them are worth viewing. These cascades fall from around 300 feet in height. 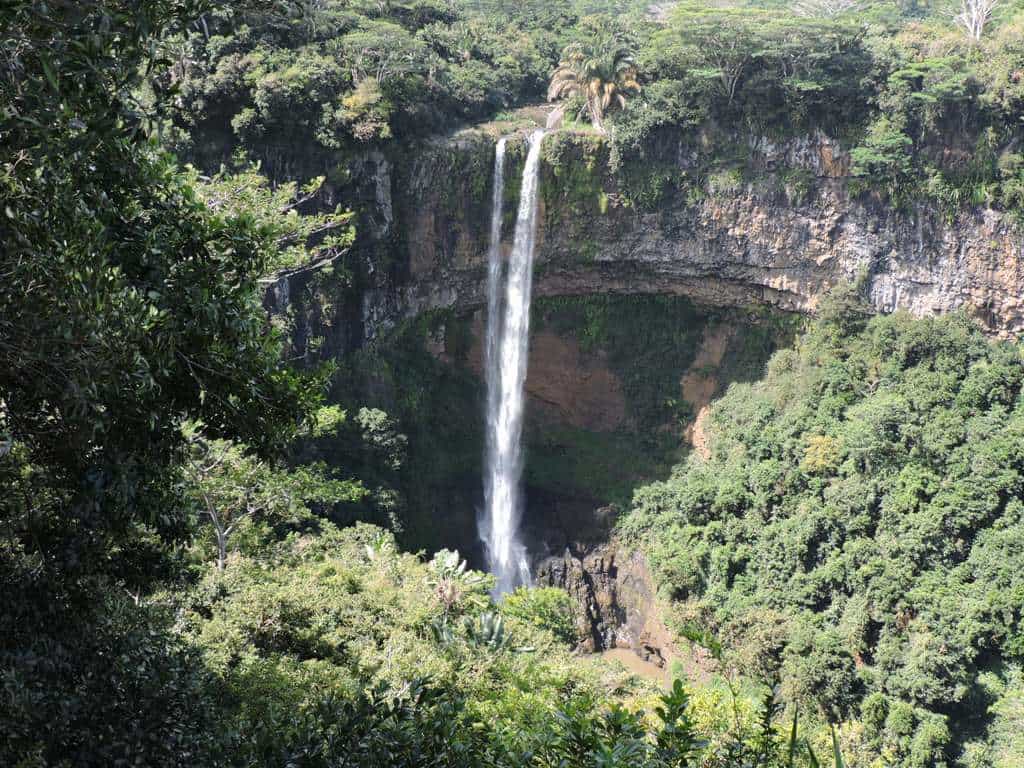 Chamarel Seven Colored earth is situated just ahead of the Chamarel waterfalls. This was the first place where we had to pay entry tickets. Rest of the places are accessible without any entry fee. Chamarel seven colored earth is as mesmerizing as seeing the marine life for the first time in life. 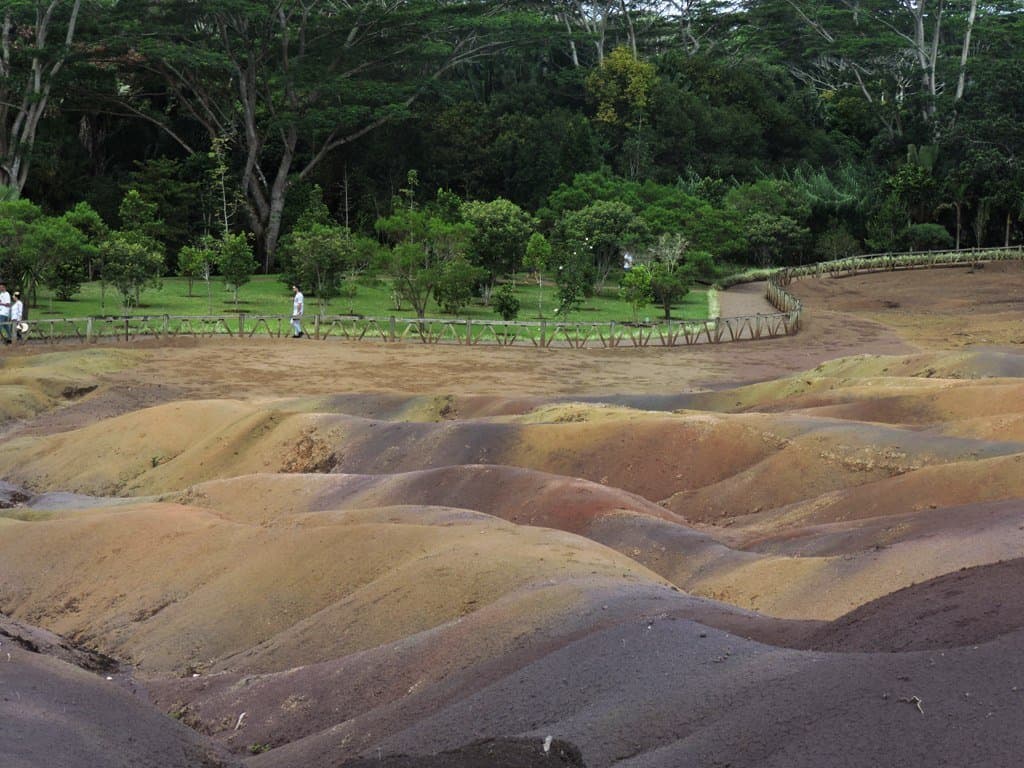 There is also a tortoise park in the corner. Do not miss that. If you want to buy something as a souvenir from Chamarel, buy rum or sample of seven colored earth from there for your friends. There is a souvenir shop and there is a lot to choose from there.

Chamarel viewpoint lies next to the Chamarel on the way to Le Morne. This viewpoint is situated at a height and from there you get a clear view of the Le Morne beach and Île aux Benitiers island. Just behind the island, there is something crystal rock. You can also go there as a part of the catamaran tour in the south.

Le Morne was one of the most beautiful beaches that I ever saw in Mauritius. On the south-west tour of Mauritius, I still regret carrying no spare clothes on this trip. The water is crystal clear on this beach as the south of Mauritius sees fewer tourists than the North. It is a long beach. You can just relax on the beach; have lunch; watch people and also take a nap. 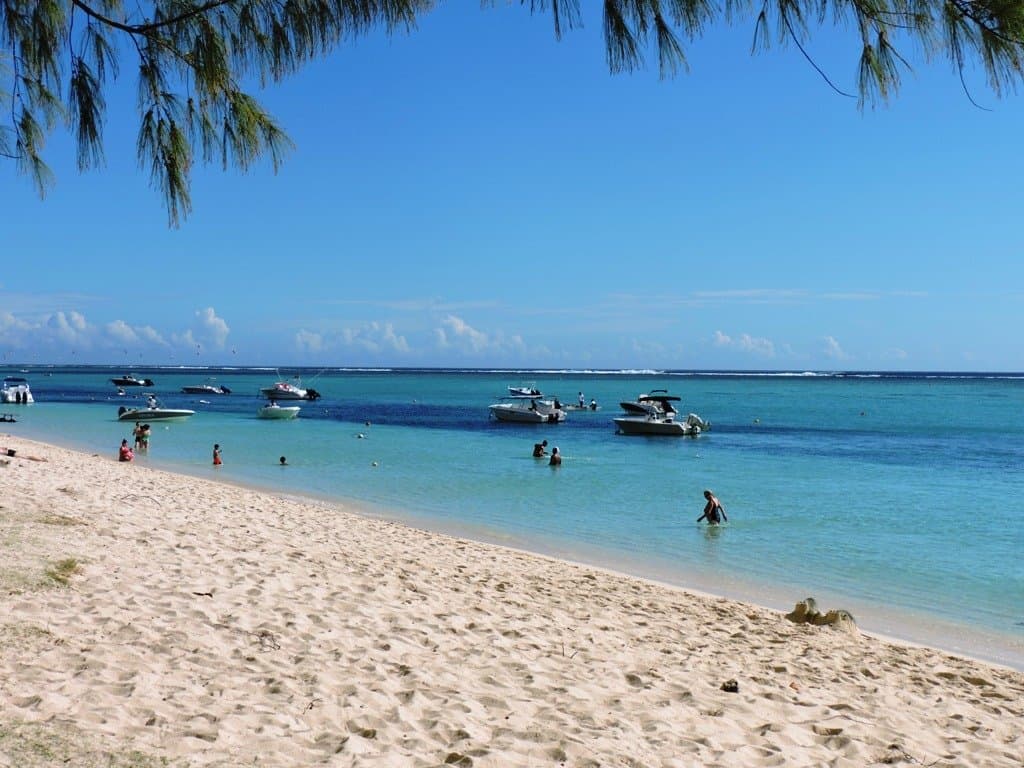 We just saw and passed by Tamarin salt fields. The salt field is still operational. It looks more like a network of small rectangular fields where water is stored in open and dried under the sun. While we were crossing, there was not much water but I can imagine how would had it been looked.

Le Morne was the southernmost point of our Mauritius south-west tour. From there, we started heading back to North while covering any places of interest lying on the way. And, the first such place was Tamarin salt fields, followed by Tamarin public beach.

On the Tamarin public beach, river Tamarin meets the sea. The width of the river there is almost 100 meters. During low tide, you can just wade across the river. We also saw a lot of kite surfers learning on the beach. The Southern part of Mauritius is famous for that.

Tamarina Golf estate as really a curious place for us. It was situated near flic n flac. According to our driver, many of the celebrities, including Shahrukh Khan and Amitabh Bachchan, have their own houses in Tamarina Golf estate which is around 1 km wide and 2 km in length. I don’t know if he was telling true but looking at the grandeur of the place, it was surely majestic.

For covering these many places as a part of our one-day south-west tour of Mauritius, we paid our driver 2300 MUR for the entire day. Some of the other points of attractions which we could have covered but we decided to skip are given below. You can decide to see these places if you have time.

That’s all marks the end of our Mauritius one-day south-west private car tour. If you some comments or if you want to share something, you are welcome.

More pictures from the Mauritius south-west one day tour: 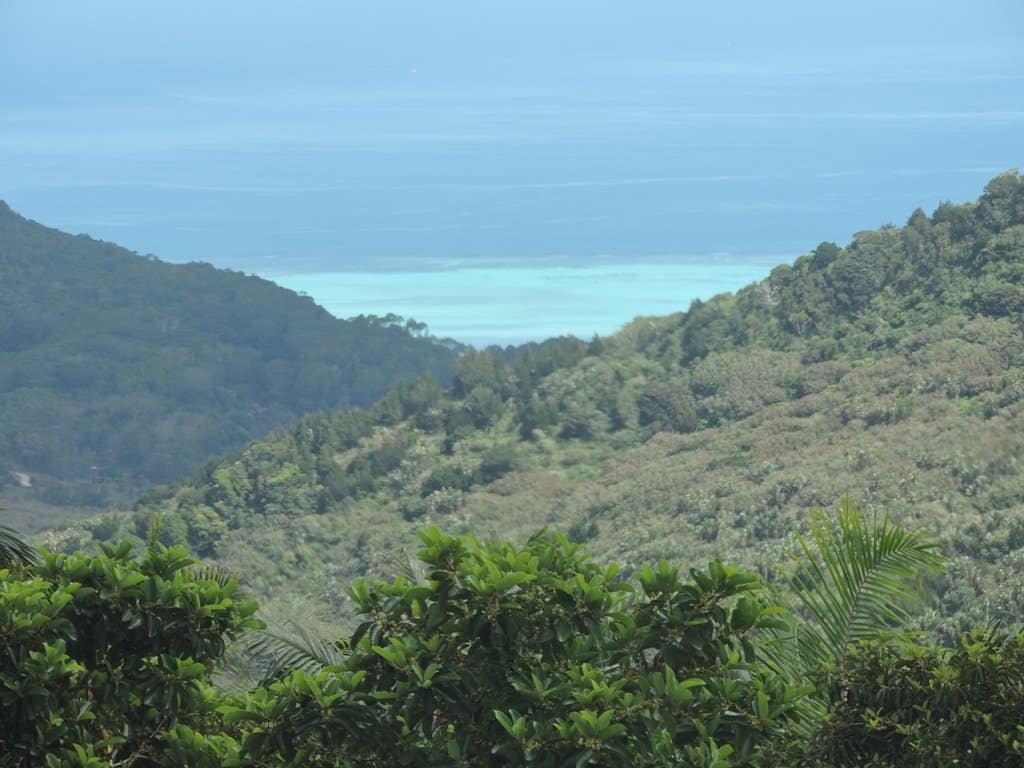 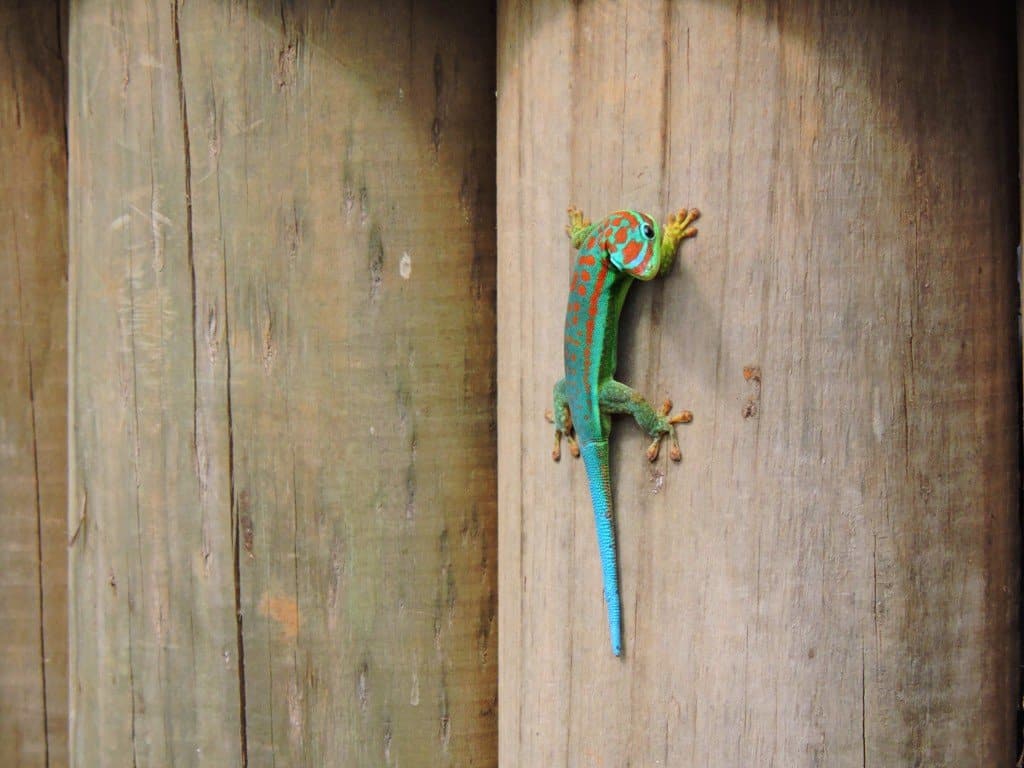 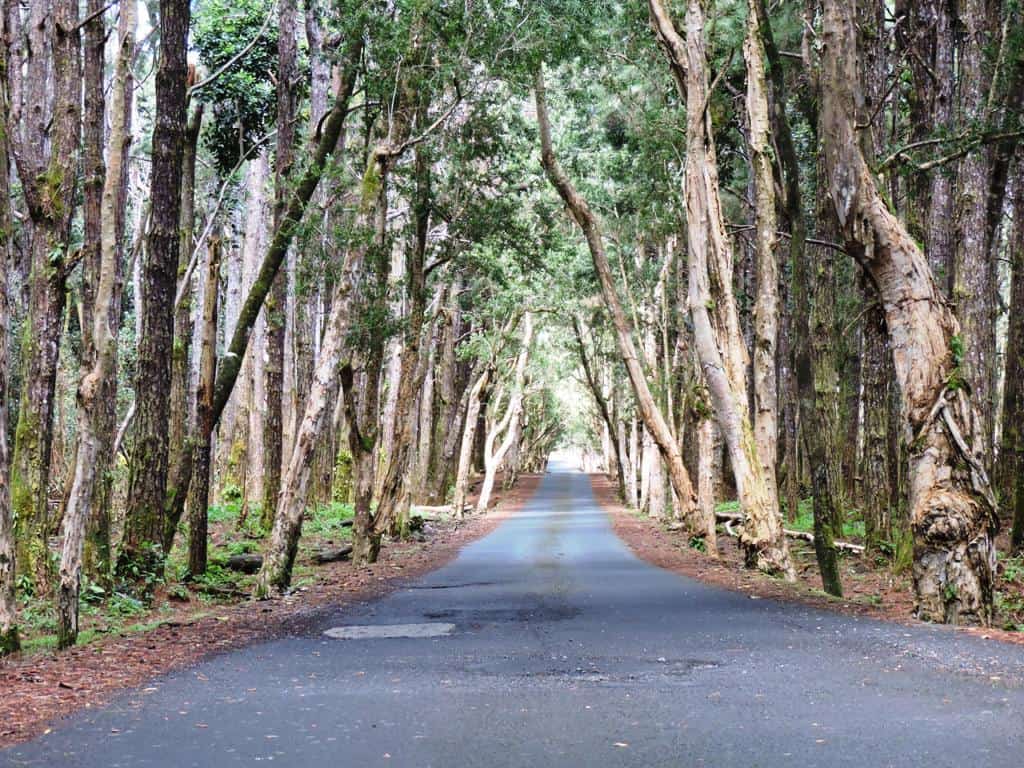 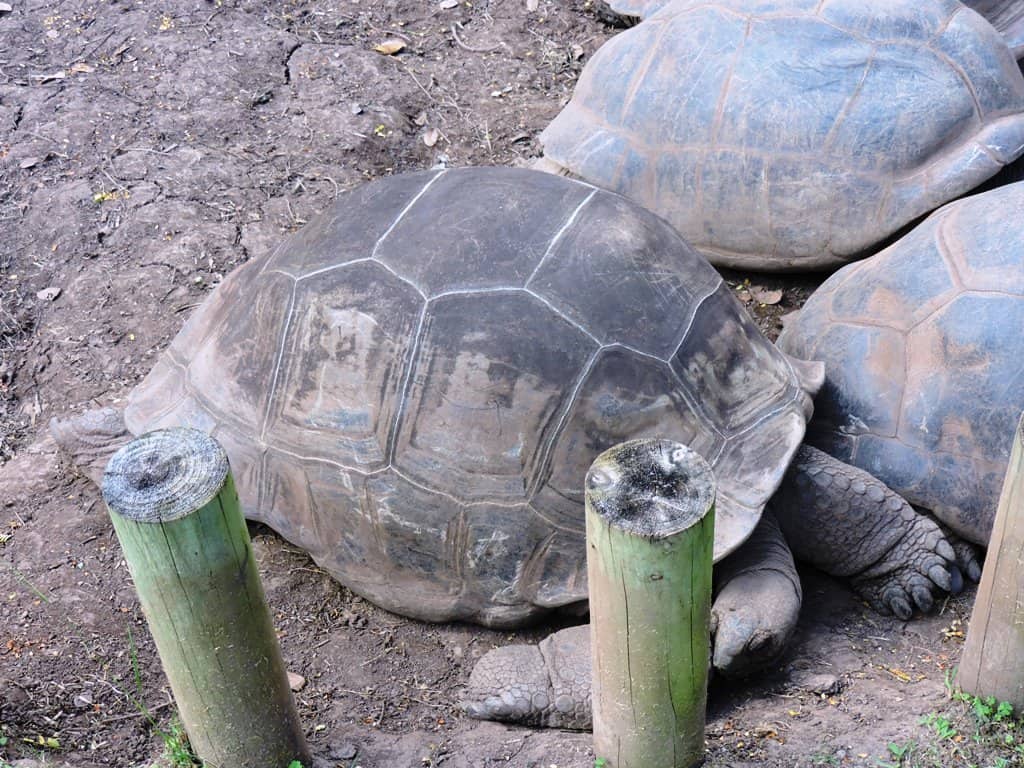