Nandi hills Bangalore is one of the most famous weekend gateways from Bangalore. Trekking and biking have become a trend in the Nandi hills. People love to spend time there.

Nandi hills are open from 6 AM to 6 PM every day. However, on the weekends, try to reach as early as possible because there will be a lot of traffic from the base of the hill to the forest department checkpoint.

If you go by bus, Tempo Traveller or bike, you will have to park your vehicle at the designated place. There is a fort called Nandi Fort at the top. To get to the Nandi hills peak, you need to go through the Nandi fort. Only cars and bikes and go inside, buses or tempo traveler do not go inside.

If you want to trek Nandi hills from the southern side just search on Google maps for “Trail to Nandi One, Karahalli Cross, Chikkasagarahalli, Karnataka“. This will show you a trail to Nandi hills.

If you want to do Nandi hills trek from the Northern point, then search on Google maps for “Nandi Downhill Biking Trail, Nandi Hills, Karnataka“.

The above trail is also very famous among the bikers and cyclists for cycling to Nandi hills as it finally joins in the Nandi hills the main road. If you love cycling, here is a list of cycling trips around Bangalore in one day.

There are mainly three staying options at the Nandi hills top

I also searched for the online booking at Nehru Nilaya and Gandhi Nilaya and found a common website for it. You can try it out: Nandihillsreservations.in

Gandhi Nilaya and Nehru Nilaya do not have good reviews about them on Google. If you are planning to stay there, do not stay on weekends ever. Weekends are like most crowdy days when there would not be any peace anywhere. Besides, there are also problems mentioned are electricity problem and they do not have power backups as well.

Hotel Mayura Pine top, on the other hand, has an attached restaurant and bar. And this recent venture KSTDC is better than the other two.

Throughout the year, winter is the best choice to go there (Don’t forget woolens in winters 🙂 )

What to see and do there?

Enjoy dew formed over grasses, cold wind piercing through woolens, clouds hanging down the hill, mesmerizing sunrise, tall trees appearing black and white at morning. If you love photographing, it’s a paradise for you. Sometimes, you might encounter wild rare flowers of western ghats beside your shoe. Walk along hill and fort’s wall perimeter for more awesome views

Things to Explore at Nandi hills:

Explore for the source of Palar and Arkavati river, Kalyani pond, Amruth Sarovar (Clue: walk along the fort perimeter walls)

Note: Leave Bangalore around 4′ o clock. On weekends, you might encounter a long queue at the Nandi hills entrance.

It had rained last day. Heavily. We were very much skeptical if we could make it to Nandi hills the next day. But, the more it rained, the merrier I got. Ask me why? Well! more rains would bestow the next morning with a bagful of pleasant surprises.

04:30 hours: Kicked off from Bangalore

There are two faces of city life: Mid-night to early morning and rest of the time. And, I was lucky to relish the beauty of Sleeping metro-city. It reminds me of the beauty of a sleeping baby. Pitch silence; pitch black road bathed under yellow halogen lights;  an unending silence floating in resonance with the loneliness of the empty streets; blithely blinking traffic lights; shut down shops seemed to me as if It was not the same Bangalore.

It was the inception of the world. Everything had regained its primitive state. But alas! Hours later, every single inch of this same lonely road would be carrying weights of vehicles; uncountable foot stamps; screeches of tires and loads of carbon.

There was the minuscule reincarnation of the same city life. We were standing at the same dapple of the colorful spinning wheel of life. There was a long queue of vehicles standing at Nandi hills’ checkpoint. Almost hundred of them. Yeah! there would be a rush on weekends but officers standing at the checkpoint make sure things work smoothly. And, they really do.

As wheels roll up the hill, tall eucalyptus trees bleached against the thick fog, appear all along the way in your welcome, fading away under the thickness of fog and silence of the valley. A silent milestone passes by. It has been standing over here for days and years showing the path of peace to humanity.

One side is the valley and another side are the grasses holding the precious dews which would evaporate when the sun would smile at them. As vehicle leaps further, you reach the Nandi fort gate and there is another kingdom engrossed inside.

6:10 hours: Inside Nandi fort at the hill

The first step that you take in, marks the territory of another world back hundreds of year ago. Yeah, there lived a king. But, in wheeling cycle of life, immortal soul eventually leaves behind the materialistic body finally to get ruffled with the five basic elements. No one lives for permanent. The only thing that is permanent is the “change”.

Every beginning has an ending but it applies mostly to the human life-cycle. However, nature’s life-cycle has no end. Maybe, the process evolved itself in every hundred of year but gradients remained the same. Maybe little more altered but their sole purpose is still the same: to serve humanity. The air, the water, the sun, all have been living a selfless life.

There must be a supernatural power governing enigmatically everything in silence which we, though, understand but, have been ignoring for years. This ignorance of ignoring prized possessions has now, eventually, led us into scarcity of happiness because we are trying to alter the balance in nature and to satiate the ever-growing needs of everyday life, we are turning our attention into materialism, away from what is abundant in nature, free of cost.

But, a day comes in our life, when we realize that our life, almost every day, gets driven by the money- the sixth sense and we wanna break away free out of bars of life, at least for a moment. Maybe, not all of us do realize it, but it can be seen implicitly in their frustration with daily life, mundane routine.

Thankfully, this tradition has still not touched upon the countryside. Someday, they might also need a timeout. Some of us, are so materialistic that even though, we need a time out, we switch over to one form of materialism to another. And, this never-ending cycle clutches us until we strongly realize from our heart that we really need to break away now.

As you step inside the old fort, try to shrink down your eyelids and see the hazy world in black and white. they are so beautifully painted. The weather up the hill almost paints the flora with the same color. It would appear as if there is an invisible layer of whitish natural color which has usurped every small and tall tree. And, as you approach little closer, the halo of whitish tinge start fading away and the picture gets clearer.

Luckier are the tall trees, standing still and long peeping out of the fog. Look down. Look around. Each and every little twig and soft stems have been carefully assigned a pearl. Perfect art of nature- the colorless water pearl. The closer you get, the deeper you see them. Looking at the concave reflection of this universe inside the drop. 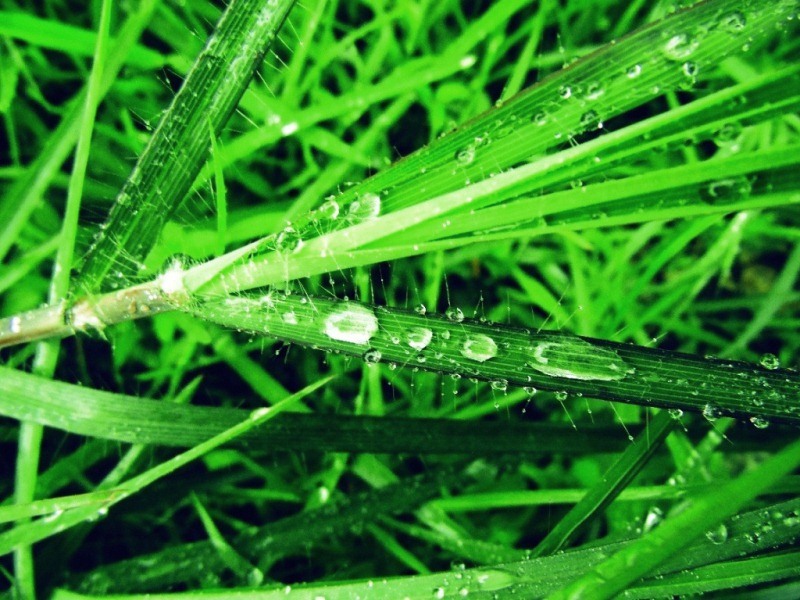 Dews holding on to grasses in the morning

Out of the earth, look at the sky.

Its filled with clouds. No, they are fog. Or are they clouds? Moving and floating with the wind. The wind would always be high up there. brushing through your hair and washing gently your sleepy face. This is hoe nature mother washes your face. Look around. Everyone is laughing. even if they fell over slippery rock. Who carried this load of happiness over here. The heart becomes guileless for one instant of time.

I walk closer to the ridge and try to look down the valley. I can’t see. All I see is a pool of white clouds formed over the valley. Putting a veil over dirty life below on the surface. Wind is even higher at the edge. You just want to laugh as much as you can.

You want to get yourself washed away in wind currents. Look at the swinging branch of a tree; look at the couples holding hands; look at smiling faces posing in front of the camera. Everything is charged and infused with a secret potion of happiness.

Surely, you have been carried away back in time and the crudity inhabited from primitive forefathers gets intensified and surged. You see the birth of super-tramp inside you temporarily. So, let me check the things out around. You wanna go deep inside and become a part of the green lost world. Venture inside; walk; realize. Capture each moment before time flies by.

The mighty sun is out there but coup of flying clouds are not ready to give the game up. Hide and seek. But I see a negotiation going on between clouds and the sun, standing on edge of the valley. There is a vast biome filled partially with varieties of plants and flowers. standing against the harsh winds.

negotiation is over now and clouds are ready to give way away to the sun. A beam of sunlight filtering through the hazy clouds touches the top of another hill standing opposite to me. Dust of soft collision fires the hills and lonely hill shines alone in the valley while misty clouds smile at them. 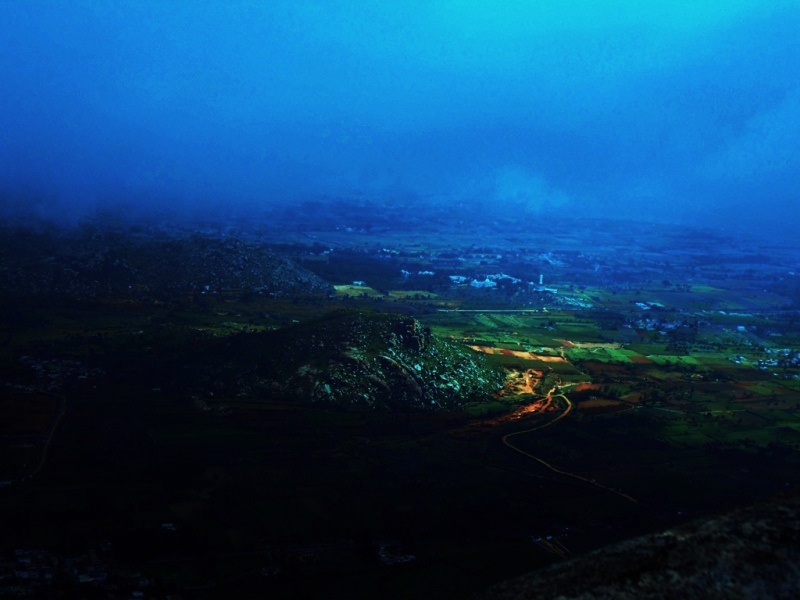 Sunrise at the hill opposite to Nandi Hills

The captured mind gets transported in some other dimension and time just flies by while I am standing still at the same place. I wish, the show could last forever but alas, everything which has a beginning has an end too. And, the sun gradually starts ruling over the valley.

Cold weather turns cool; then warm, and would get hot sooner at top of the hill. Three hours have passed by, I have stepped over every single yard of land in search of what I don’t know but I always loved it. I have discovered so many things. Some I would carry away with me in my mind, some footprints would be captured inside my camera and some would still remain there for coming days to serve the same unknown purpose of life for another lost tramper. 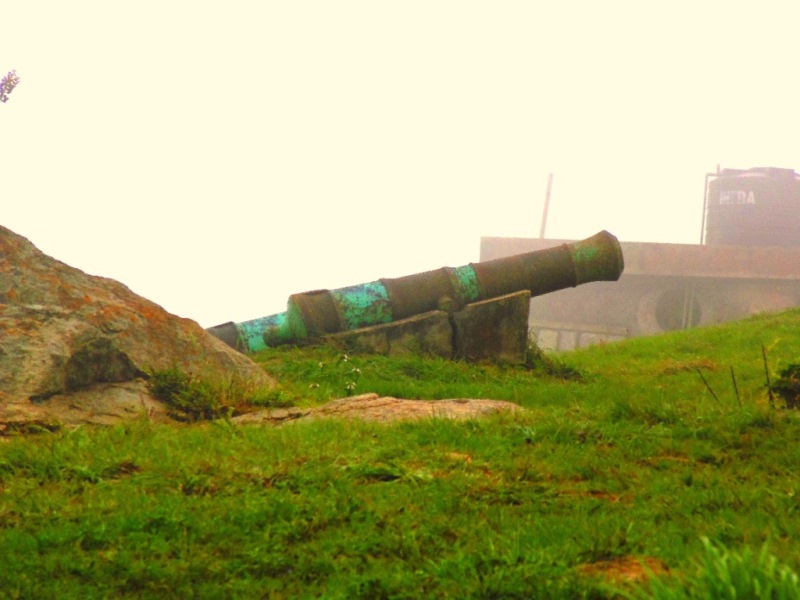