Gandikota often termed as “Grand Canyon of India” is a small village on Penna river banks in Andhra Pradesh. Situated nearer to Belum caves, the ruins, temples, walls and stones of Gandikota will remind you of Hampi as well.

How to reach Gandikota from Bangalore?

There are hardly any public transports available from Bangalore to Gandikota. So you can either go by your own bike or car or if you organize any trip, you can go by a rented vehicle like Tempo Traveller. But remember that, you will have to pay an inter-state tax of around Rs. 3500 for entering into Andhra Pradesh from Karnataka for a tempo traveller.

There are different charges for different kinds of vehicles. The inter-state tax has to be paid near Kodikonda on the way.

Gandikota is 15 km from Jammalamadugu town of Andhra Pradesh in Kadapa district. You can ask any local about the Gandikota and they should be able to guide you to the Gandikota. A jeep can also be hired from there for the Gandikota fort. There is no entry fee or any proper opening timings.

On the way to Gandikota fort

Getting Fresh/ Bathroom facility near Gandikota:

As such there are no public toilets near Gandikota. However, just before 1 Km from the Gandikota village, there is a hotel named Haritha hotel run by Andhra Pradesh tourism department where you can get fresh.

On our last trip, we reached Gandikota around 4 AM in the morning. So, we parked our vehicle there in the compound of Haritha hotel. There is an open bathroom in the Haritha hotel compound. There you can get fresh and can even take a shower.

On the same trip, while returning in the evening from Gandikota, we took a bath there and had dinner. Food quality is also good there.

I also saw some bikers pitching their tent over there. So, if you love biking, then you can also pitch your tent there in the hotel compound. However, I would suggest you to camp near the Gandikora canyons.

Staying and Camping option at Gandikota:

There is only one hotel of good quality near Gandikota, its Haritha hotel (073822 37380). People have given the good ratings of this hotel. This hotel has a big parking space, play area for children, spacious and clean rooms and bathrooms. Haritha hotel is situated just before the Gandikota village. While driving you can also see the hotel to your left just before entering Gandikota.

If you are an adventurous person, you can also camp near the Penna river ridges. I have been there twice and once, villagers were too kind for us to open a temple and we slept inside the temple peacefully as it was raining.
Also, note that Gandikota is a small village. Expect not to find cooked food on camping. However, you can find small things like a water bottle, cold drinks, eggs etc.

Before, you proceed further to read more about the places of interest in Gandikota. Click on the Gandikota map below and Kindly save it. It will further help you in understanding the places to see in Gandikota. 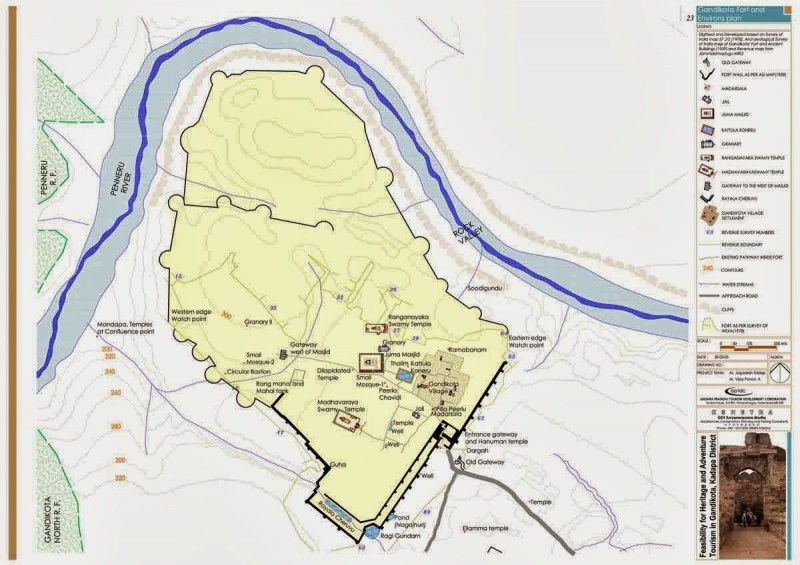 Gandikota is famous for its grand canyons as well. The canyon is on both side of the river Penna over there. The river will usually be dry throughout the year. however, sometimes, there will be water as well in the river and crossing to the other side of the river might be difficult.

Points of attraction at Gandikota Fort:

1. Gandikota fort, the walls, and the perimeter:

Gandikota fort is spread over miles. You can walk along the west fort wall perimeter and can enjoy the sunset and windmills stationed at a distance from there. At the fort, a history awaits you which has lost its force. Yeah! there too was a civilization there once and now left over with a small village.

There are still remains of a mosque, temple, granary, a royal pond, clock tower and many more historical heritages. Watching the lost past impregnates a taste of inevitable mortality and philosophical liveliness of this ephemeral lifespan. They were there; they built; now they are no more but their heritages stand alone.

The temple is made up of red granites. There is not any statue inside, but remnants of the temple are ideal for photographers. Also, there are Mantapas and pillars along the perimeter of the temple.

Surrounded by a series of Mantapas and stone pillars, the temple would cue you a movie scene. It is grand; it is spectacular; unlike other temples, the serenity has been prevailing here for centuries. No worship, no rush and no enchant.

Still, there is something mystical which would keep you engaged for hours even though there is not any single statue of any god. Air whistle through pillars; the life resonates within; eyes cant take of the stone stunners. They are abandoned once they must have their own life. Nothing seems to be permanent except the earth and sky. 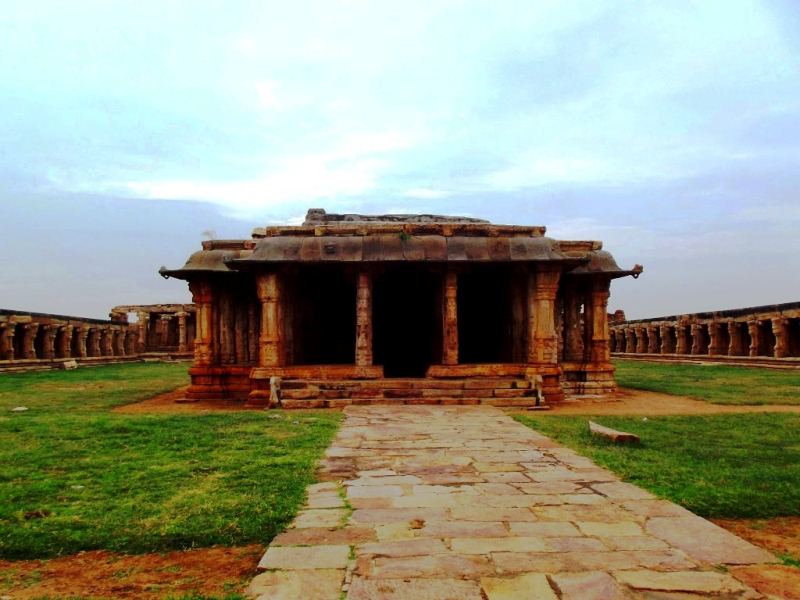 There are two parts of the mosque: the entrance and the mosque with two minarets. And beside the temple is the mosque. Hear any Sufi song when you are there. Imagine yourself surrounded by the great Sufi singers sprinkling the melody of love slowly. Drink the elixir of love at the foundation of Allah. There is no more lesson to learn; there is nothing more left to earn. There are the silent soothing currents floating over the air.

They would kiss you; teach you the lesson of life; the immortality is earned through deeds and Karma; there is the only path to the piousness- the love. The love carved on the minarets with precise dexterity. The love embodied on the tomb on the name of divine supreme being. Ataraxis, Serenity, repose etc.. make your senses squeeze and smell silence for a while.

A temple dedicated to Lord Vishnu is in the west side of the village. It can be seen from a distance. There are small statues and sculptures of Hindu Gods carved over the Gopuram and walls of the temple.

Here comes the grandiosity but its derelict. It looks like that a monument has been preserving an odyssey of Journey in its every brick and sculptures. Each sleight carving becharms the magnitude of the social and cultural aspect of the lost kingdom. The dreams of the king, his realm, the people and the lost future preserved in granites. 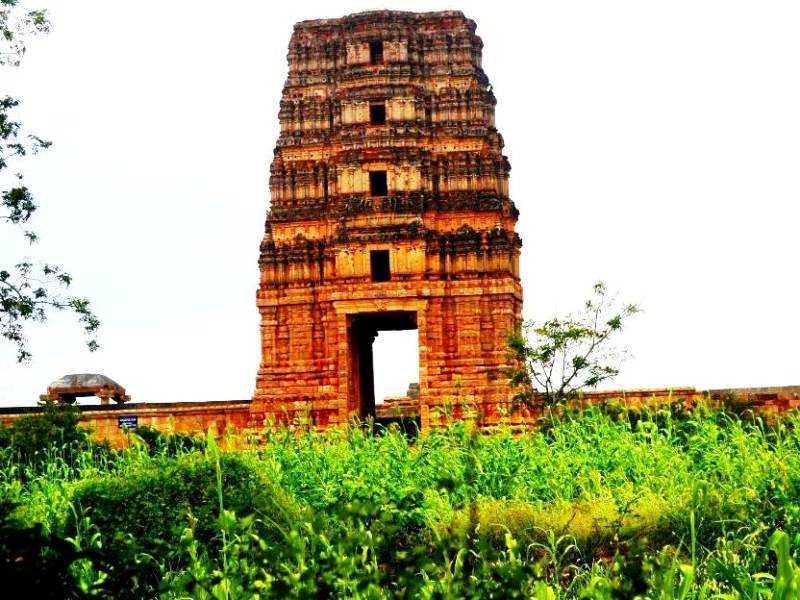 The unity in diversity. The talking monuments; the eternal feeling; the ethereal dimension. When I looked at the above picture again, they appeared to me as though the two lost entities in the race of civilization, left behind. But they stopped over there and an ultimate chronicle rose from bewildered and retiring times and leapt inside these memorials. The curator of fourth dimension knew that one day the race of civilization would slack off and it had to uphold an exceptional reference which would always remind the society of orders of the past.

The granary is said to be used for storing grains. It is adjacent to the Jamia masjid and to the west of Raghunathaswamy temple. 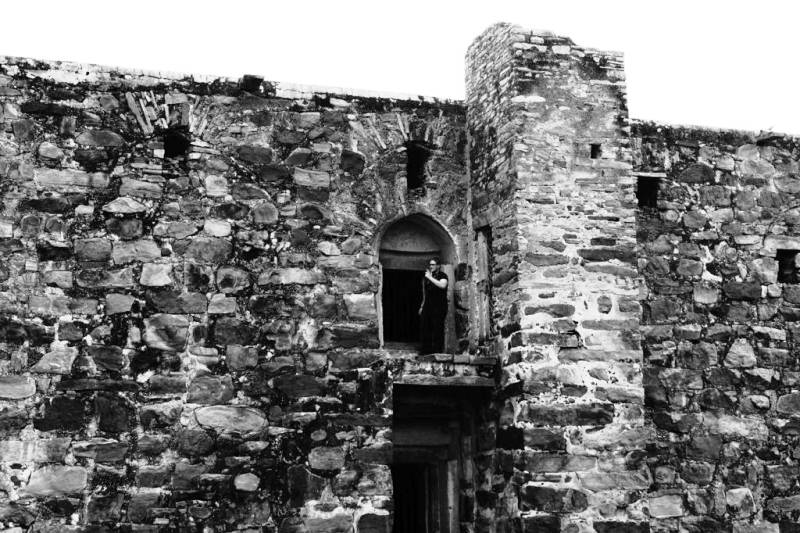 You have to walk a little bit from the Madhavaraya temple towards the west walls of the fort to see the royal tank. Royal tank is a perennial spring irrigating some lime and plantain gardens. 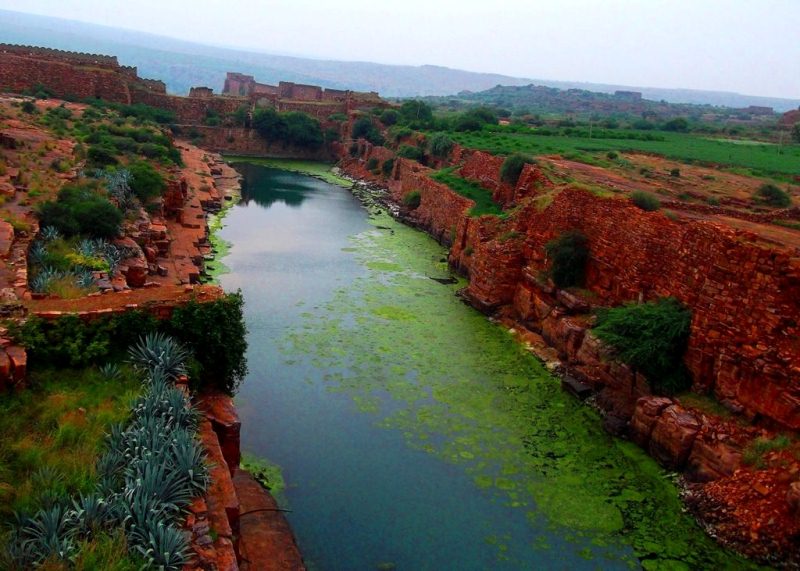 200-300 meters east of the Raghunathaswamy temple,  lies the river Penna gorge. It is said to be the “Grand canyon of India”. The gorges are almost 300 feet deep from the cliff which made the fort almost unconquerable due to its natural defense.

River Penna gorge towards the east

River Penna gorge to the west

Rocks arranged purposefully or those were randoms? Did I see a huge human stone face looking up into the sky? The layer after layers of rocks and fine but considerable cracks running through them. It was a pilgrimage for the adventurer like me. I see my God here. The god in leprose canyon faces.

The white angels in form of the cranes flying over Penna river and white flickering shadows running beneath them. The calm river not less than the Colorado looking like a sleeping beauty. I wish there should be temperature inversion which would fill the canyon with natural thick fog in winters.

I wished much more than this. I wish I were an eagle. I would have my nest in one of the highest cracks at the creeks far from civilization. I would have flied much higher in the sky and would have taken the tour of the valley and canyon everyday.

I would have loved to watch my own shadow floating seamlessly over the sleeping water. In the evening, I would have sat at the highest peak. I would have enjoyed the red glittering stones shining under the setting sun. Sometimes, they had be yellow, then orange then maroon and they would have finally turned black in the night. But on the full moon day, I would have been the luckiest eagle on this universe to watch the black valley turning into a golden valley gradually for the whole night. 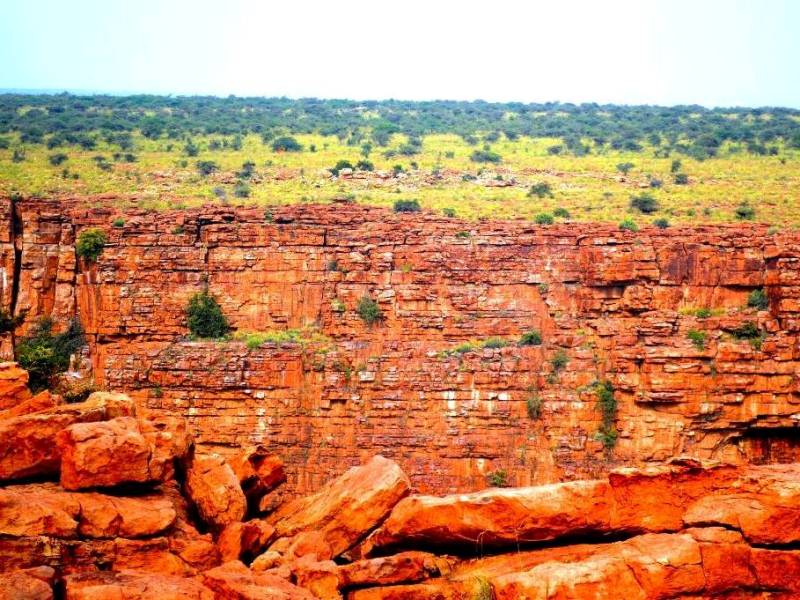 Opposite side of the river Penna gorge 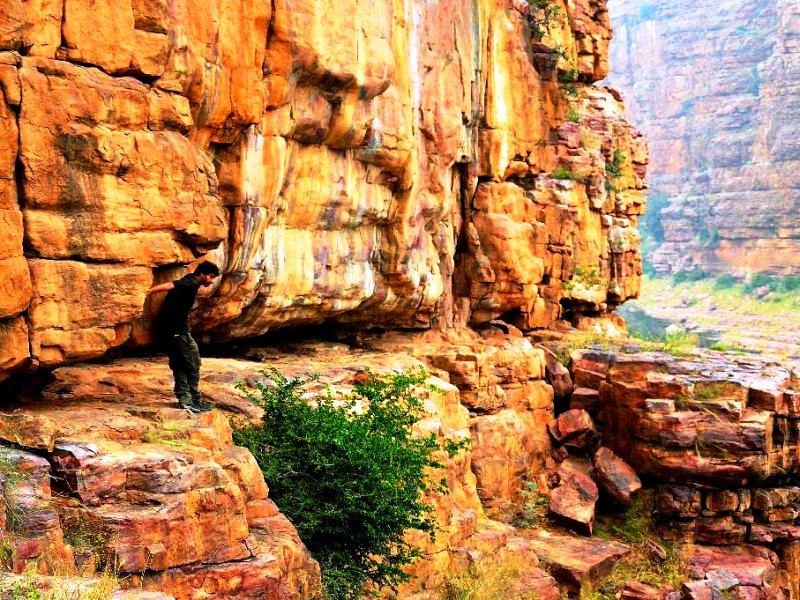 Someday, I would love to have a bit of  Christopher McCandless with in me. I would dare to narrate my own story. I would bring my own kayaks. I would slip into the river and I would explore with a high zoom camera along with my friends.

I would love to get down. I would love to explore the cracks. I will burn a flash inside them. I would find a new route for the civilization in the lost civilization. I made a dream and may be, someone else might complete it before I do but I will. Someday. 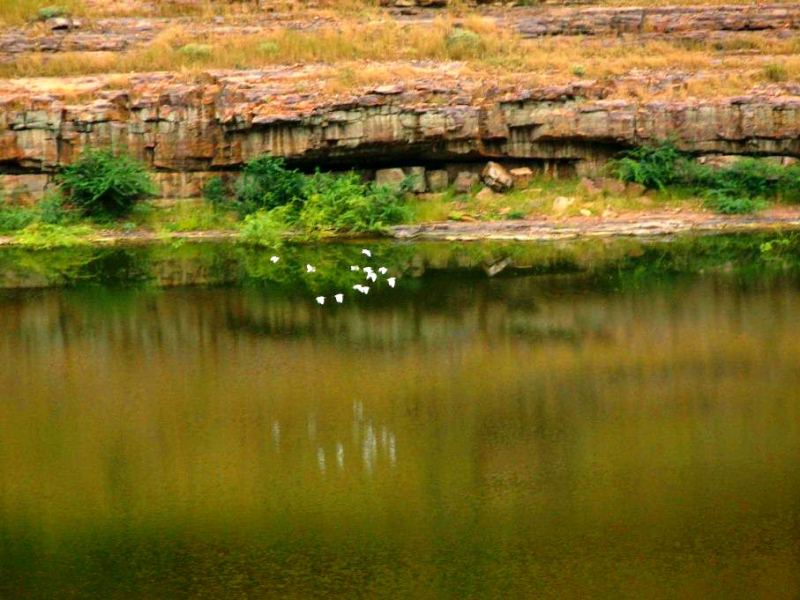